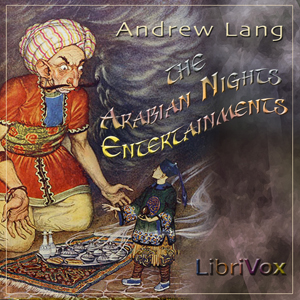 LibriVox recording of The Arabian Nights Entertainments by Andrew Lang

The Arabian Nights is a collection of Perso-Arabic folk tales and other stories. The collection, or at least certain stories drawn from it (or purporting to be drawn from it), became widely known in the West from the 18th century, after it was translated from the Arabic — first into French and then into English and other European languages. The first English language edition, based on Galland's French rather than the original Arabic, rendered the title as The Arabian Nights' Entertainment - and this, or simply The Arabian Nights, has been the title by which it has been best known to English-speaking people ever since. (Summary from Wikipedia)

Reviewer: listerene - favoritefavorite - April 2, 2010
Subject: great collection
I wish the reader would slow down a bit,that could be done with some minor digital editing if she can't. It's kind of hard to listen to in a relaxed fashion due to the speed and the German? accent, one has to really concentrate on getting the words at the expence of enjoying the story.

Uploaded by librivoxbooks on November 27, 2009